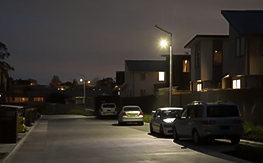 Housing New Zealand’s challenge is to provide housing for the nation’s most vulnerable people in a way that’s safe, healthy, sustainable, and cost-effective. The Leadsun solar street light is helping to meet those needs.

This HNZ development on Auckland’s North Shore is one of many new communities using solar shared pathway lighting.

In this development, the shared accessway serves as vehicle access to multiple homes and is also used by pedestrians, including visitors to the community and small children at play. Safety and security are paramount. 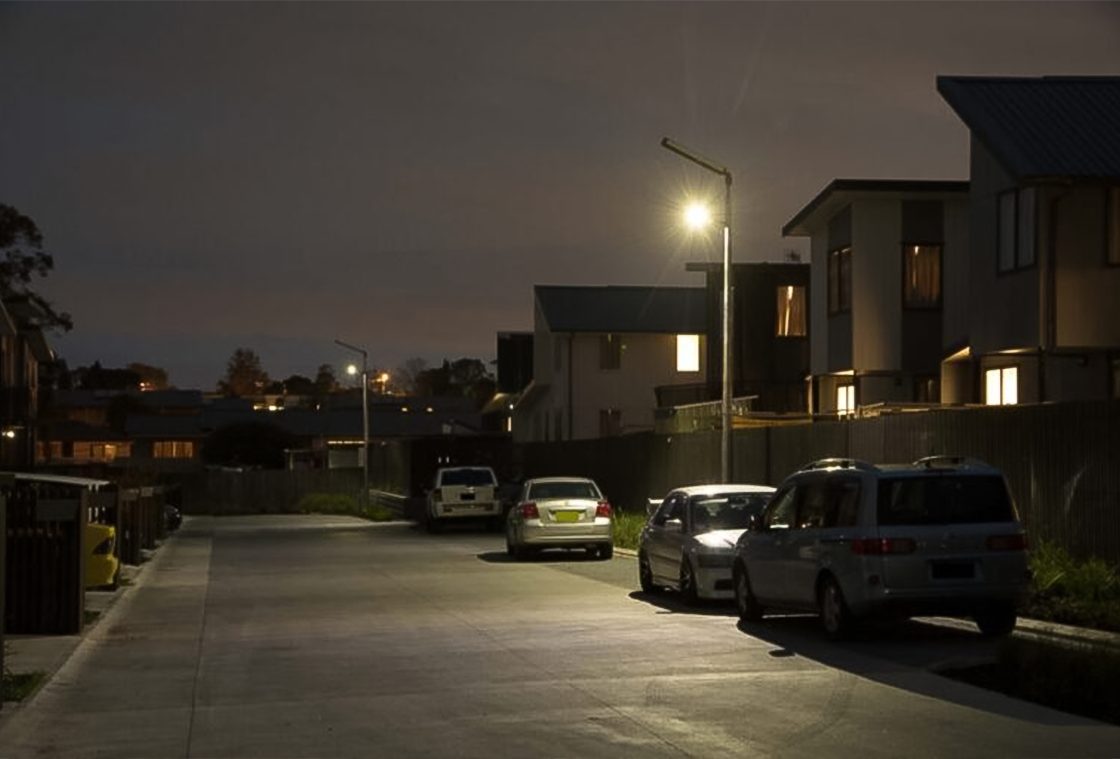 As well as being off-grid, the solar street light conserves its own power by dimming down to 30% when no one is around. This still provides enough background light to maintain a sense of security. The low light on the accessways also helps to maintain a sense of community within the development, rather than isolating the homes in the darkness.

When significant movement is detected – a vehicle or a pedestrian – the unit switches to 100 percent output, giving enough light to identify hazards on the accessway and plenty of solar shared pathway lighting to deter unwanted activity. Because the unit dims quickly when people leave the area, the accessway is not lit all night with an unnecessary level of light.

By choosing a solar solution on this site HNZ didn’t need to run a cable to the light fittings and they don’t have to pay for power. The Leadsun solar street light, with its dimming and presence detection, gives the residents all-night security without over-lighting their homes and surroundings. 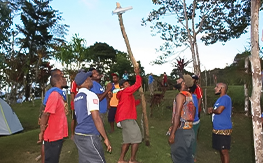 Leadsun & the Kokoda Track Foundation, Ready for the Partnership to Help Shine a Light on PNG!

Leadsun is proud to announce a Collective Energy(c) Initiative with the Kokoda Track Foundation www.ktf.ngo after our Managing Director Matt Pollard recently undertook the Kokoda Track journey and also explored some exciting projects to help light-up communities surrounding the Kokoda Track in PNG.

During Matt’s visit to PNG, he learned that a staggering 87% of Papua New Guineans still don’t have access to grid electricity infrastructure and most villages are pitch black at night. But rest assured; Help is on the way and so far more than 3,000 indoor solar lighting kits have already been delivered & installed throughout 30 PNG Villages as part of KTF’s initiatives to provide lighting in people’s homes. 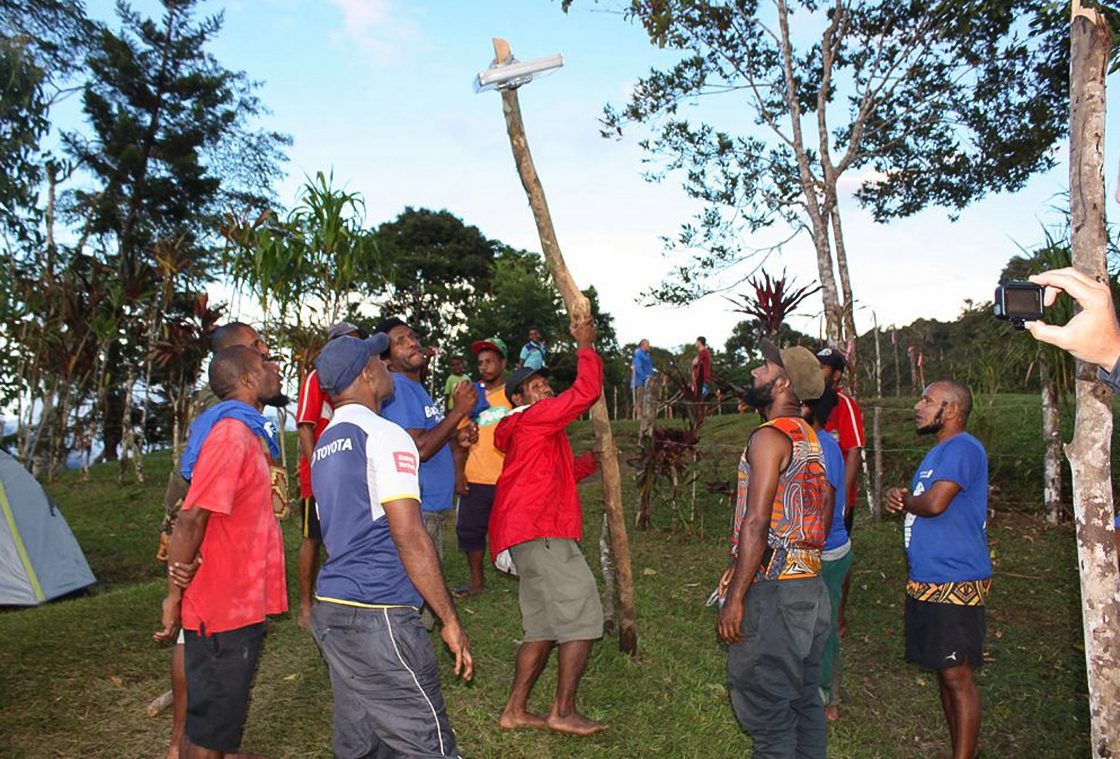 Leadsun will be further supporting the ‘Kokoda Track Foundation’ with their ambitious Livelihood Project https://lnkd.in/gJUT8-N which seeks to build new community learning centers throughout the Kokoda Track region, and also provide them with access to solar-powered light and power systems which will help enable further education for young people and a better chance of a brighter future! 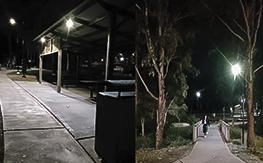 Residents Around Australian Urban Forest Safer Thanks To Lighting Reality

Residents and visitors in and around an area of Urban Forest in New South Wales, Australia, are feeling safer thanks to a new led solar lights plan created and implemented by Leadsun, using the latest software from UK-based Lighting Reality.

Camden Council in New South Wales wanted to install a new solar lighting system along a 150m stretch of its urban forest in Narellan, in order to deter loitering, reduce vandalism, and provide a safe walking route for local residents.

Solar power lighting specialist, Leadsun Australia, took on the project with the mission of creating a well-lit and safe walkway for pedestrians, while also ensuring that the forest wildlife and surrounding homes were not negatively impacted.

Leadsun, first established in 2005, is a leading lighting manufacturer committed to innovation and intelligent eco-friendly solutions. They specialize in safe, smart, and sustainable lighting for the future.

“The system was powered by remote AE3S80W solar engines circuited to each of the shelters, and the resulting consistency of lighting is very good with no ‘black’ spots along the pathway.”

“The urban forest also features a unique light timing sequence where they dim down to 30% brightness after five hours from dusk and are then operated by a motion detector until dawn.”

“Not only is the amount of measured vandalism down, but locals are also very happy with the new lighting which helps them to feel safer when walking to and from their local shops.”

Bewdley-based developer Lighting Reality provides software that allows designers to create lighting projects for all manner of exterior environments, in a fraction of the time that it takes other competing lighting design software.

Rachel Green, the marketing coordinator for Lighting Reality, said: “With the fantastic work by Leadsun’s project designers and their specialist products, the urban forest area is now a much safer route for all. This is a great example of a challenging project that has been assisted by Lighting Reality software, and really shows the applications’ ability to be applied in a wide range of outdoor environments.”
The Lighting Realty PRO software supports all major international standards and is constantly evolved as these standards are upgraded.

First launched in 2001, Lighting Reality PRO is now used by around 97.5% of British councils, and the company estimates that around 90% of exterior lighting engineers in the UK own a copy. 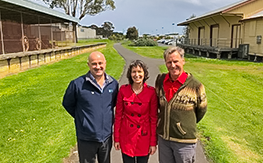 Lighting up the Rail Trail

The Rail Trail Illumination Project, which received $198,000 through the State Government’s Pick My Project community grant initiative, will soon get underway.

The Project will see 48 off-grid solar lights installed along the Bass Coast Rail Trail, including in the car park and community space behind Apex Park, between McKenzie Street and South Dudley Road. The design and fabrication work has been finalized and the contractor will start work on the installation of the lights from Monday, 14 October with work to be completed before Christmas.

Once installed, the off-grid solar lights will operate at full brightness from dusk for five hours and will then operate dimmed for another three hours. If movement is detected while the lights are dimmed, the built-in internal sensors will trigger the light to full brightness for 30 seconds.

Local residents, Karen Thorp and Max Richter submitted the application for the Illumination Project to the Pick My Project initiative.

“The State Government’s initiative opened up the opportunity for us to put this project out there and we are thrilled that it received enough support to be funded,” Karen said. 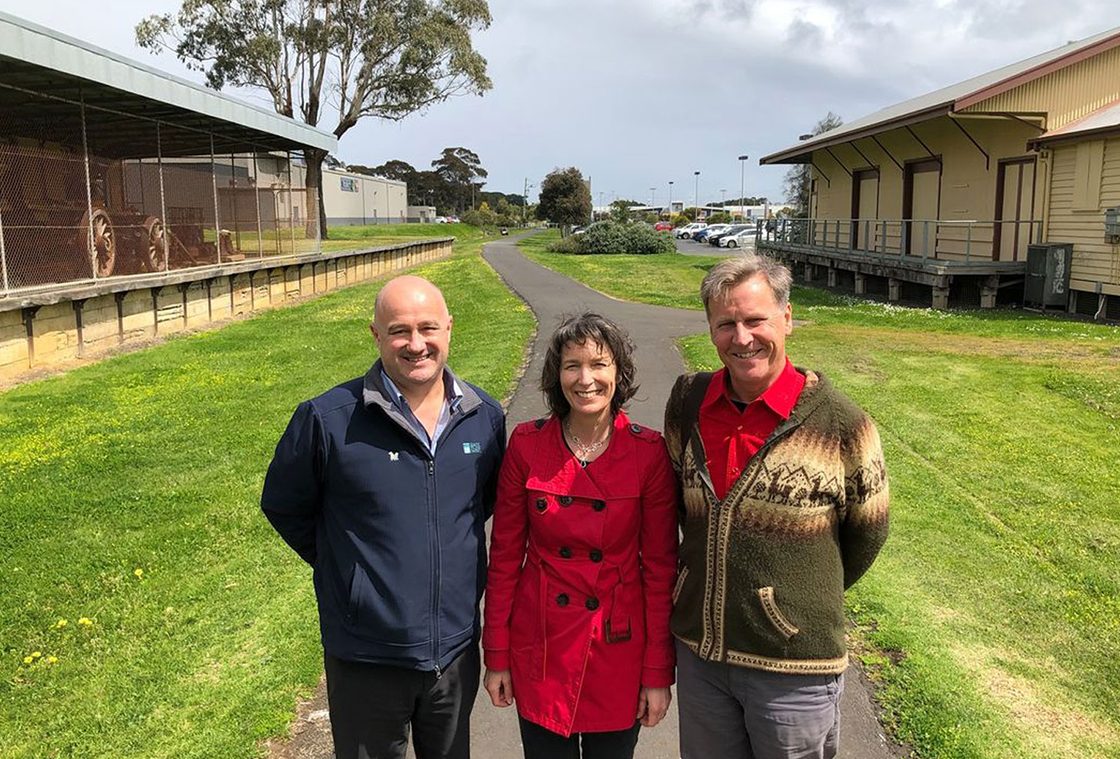 “The whole community is excited about it – they have had a say, and now it’s about to happen.”

Bass Coast Mayor, Cr Brett Tessari, said it was fantastic to see work starting on the project, which will benefit not just trail users, but the whole town.

“Once installed, these off-grid solar lights will improve visibility at night, increase overall access and convenience, give Trail users a sense of security and increase the opportunity for physical exercise,” Cr Tessari said.

Member for Bass, Jordan Crugnale said, “This is an Andrews Labor government initiative where individuals and groups with brilliant ideas have brought their projects to life, supported by their community, all to make their local area better in some way.”

“I want to thank Karen Thorp and everyone involved in this wonderful project where an old rail trail meets with new energy, giving everyone better visibility and activating a much-loved path through Wonthaggi.”

Work will be carried out between 7.00 am and 5.00 pm Monday to Friday (unless otherwise advised) and pedestrian and traffic control measures will be in place throughout the duration of the works.

The council appreciates the patience of the community while this work is underway and the contractor will make every effort to minimize disruptions to trail users and others impacted by the works.

Copyright © 2023 LEADSUN | All Rights Reserved
Scroll back to top