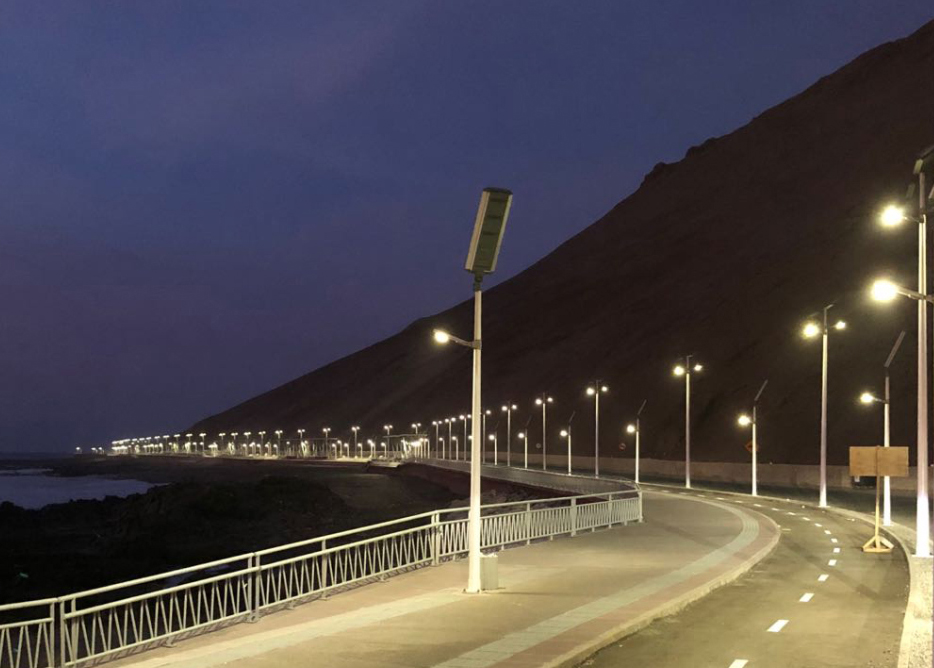 Arica is located at the bend of South America’s western coast known as the Arica Bend or Arica Elbow. Its mild weather has made Arica known as the “city of the eternal spring” in Chile while its beaches are frequented by Bolivians.

Michelle Bachelet, the Hon’ble President of the Republic of Chile, Alberto Undurraga, the Minister of Public works and Gladys Acuna, the Mayor of Arica y Parinacota Region, took part in the inauguration of Plan Especial de Desarrollo de Zonas Extremas (PEDZE) – ‘the Special Plan for the Development of Extreme Zones’ where the investment volume reach 6280 million pesos on Corazones beach.

The president was fascinated by the beauty of the whole place after she walked over 1200 meters throughout the infrastructure which was built on the southern coastal edge of the city, following the coastal walk of Cuevas de Anzota.

The authorities have a challenge in illuminating the whole area without disrupting the scenic beauty and the eco-friendly concept of the infrastructure. Along the 1200 meters coastal walk there are biker’s lanes, shaded stations, parking lots, restrooms, street benches, maritime protection, lifeguard, and an esplanade for the food services.

The lighting also had to be bright enough to illuminate all these areas without compromising on the energy efficiency, easy to maintain, and eco-friendly.

In addition, the design of this coastal walk considered the concept of self-sustainability.

A total of 240 units of LED solar street light systems were installed along the coastal edge using the LEADSUN’s products which exceeded in satisfying all their requirements.

The new installation from LEADSUN illuminated the whole region with solar and created a center of activity for the local community and visitors while enhancing the vibrant coastal front and encouraging further development.

– Michelle Bachelet, The Hon’ble President of the Republic of Chile

Copyright © 2021 LEADSUN | All Rights Reserved
Scroll back to top