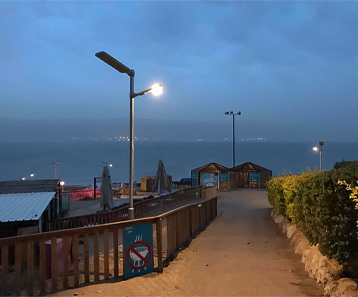 Kalya is an Israel settlement and Kibbutz in the West Bank. It was originally established in 1929 but was occupied and destroyed in 1948. It was later rebuilt in 1968 on the northern shore of the Dead Sea, 360 meters below sea level. Leadsun’s off-grid intelligent lighting has been the chosen one for illuminating this Kalya Kibbutz, Israel.

Let’s see how and why?

It is well-known that the Dead Sea is a unique place on the earth and it is famous for its extremely high salinity. The land around the Dead Sea is a spectacular desert, with sunny skies almost year-round. In the summer the temperature rises to 40℃ and sometimes reaches 55℃. The humidity of the air hardly exceeds 40% and it drops in the summer to an average of 23%. It was a challenge whether any street light can work efficiently in this harsh environment while saving energy and cost.

The first 4 sets of AE2 series off-grid lights were installed in the Kibbutz six years ago, even under harsh conditions, these solar street lights are still working completely perfectly while withstanding high temperature, high humidity, and high salinity.

The authorities had the challenge to install the solar street lights on the steep way to the beach.

Due to the extremely hot and salty air condition, the street lights have to be competent enough to overcome these severe weather conditions while providing sufficient lighting.

Due to its successful past history and its recognized structural rigidity, Leadsun proposed the same off-grid lighting solution to overcome all the installation contingencies along with saving energy and the cost.

The authorities were so satisfied with the proven solution that they immediately commissioned the proposed AE2 split type solar lights 25W and 30W PV with 12W 3000K Cree LED at Kalia Kibbutz. With a simple installation process, dozens of Leadsun solar street lights were installed throughout the steep slope along the beach quickly and successfully.

“Leadsun’s range of off-grid lighting is reliable and trustworthy. More than hundreds of AE series will be installed this year.”